Located on the jetty east of historic Crissy Field and north of the Marina Green, at the end of Yacht Road in San Francisco, The Golden Gate Yacht Club sits as a tribute to those who have made the Club what it is today – a friendly, relaxing getaway for good friends, great sailing and boating, and remarkable views. 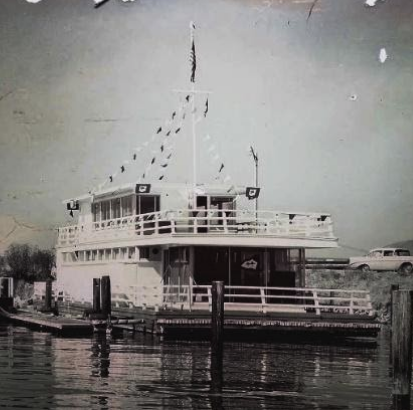 Puerto d’Oro Yacht Club (the original name of Golden Gate Yacht Club) was established in 1939 as a gathering place for fishermen coming in from a long day of fishing outside the Gate.  This group of fishermen anchored a barge in the harbor so they could tie up and relax before continuing on their journey to their boat’s berth.  It is interesting to note that at the time the Club was established, the World War II was just ramping up in Europe.  In spite of international events, these fishermen were not deterred from enjoying their time together on “The Barge”.

In 1941, the Club’s name was officially changed to Golden Gate Yacht Club and it continued to be a respite for fishermen.  Many of the Club’s members were drafted into the War, and those who were not, continued to fish or gather at the Club to race sailboats if there was no fishing.

At this time, women racing on San Francisco Bay (or racing in general) were the exception, not the rule.  World War II ended in 1945, but by 1950, the United States was involved in another war in the Pacific.  Many women, whose husbands were call into action, had become used to racing with their husbands.  At that time, one had to be a Yacht Club member to race on San Francisco Bay, and women could not be members of a Yacht Club.  In fact, the Commodore of Golden Gate Yacht Club stated that “No woman was going to race for Golden Gate Yacht Club”.  However, if the husband was a member, the wife could be a member of the Ladies Auxiliary, and therefore would be able to race on the Bay.

Like the Barbary Coast, Golden Gate Yacht Club has a colorful past.  Following the Korean War, sailors/fishermen came back to enjoy their time at the Club.  Sometime in the late 50’s, the barge became a semi-permanent structure, with reminders of its beginnings.  Through the 60’s, – 80’s, the Club was known for its open-door policies – there was dancing on the bars, swimming in the channel, and all members had a key.  The Bar was the honor system, and many a night found some members sleeping comfortably on the couches located throughout the Club.  The Club remained known as the “Friendliest Club on the Bay” and remained a great gathering place for members along with members from other Clubs. 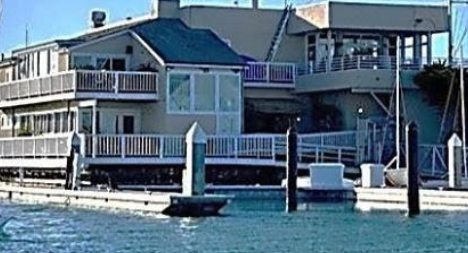 On October 17, 1989, San Francisco and the Marina District suffered devastating losses through the Loma Prieta Earthquake and Golden Gate Yacht Club was no exception.  The original Clubhouse was destroyed and members found themselves without their beloved Club.  They banded together, donated money, and worked to rebuild the Club.

This was one of the proudest achievements for GGYC – being able to say that we were the homeport of ORACLE Team USA, San Francisco’s America’s Cup Team.  Very few Yacht Clubs in the United Stated can make the claim of having an America’s Cup Team on their roster and for many, the America’s Cup trophy symbolizes the epitome of sailing, as it is the oldest trophy for international competition in any sport.

Golden Gate Yacht Club now has the honor of being the sixth trustee and holder of the Cup in its 169 year history, the first American winner since 1992, and the only American Challenger to have won since 1987.  It has been an honor to have had the opportunity to partner with ORACLE TEAM USA through the original win in 2010 in Spain, the win again in 2013 in San Francisco, and the defense in Bermuda in 2017.  GGYC has the honor of being only one of three US Clubs to hold the trophy in its history – New York Yacht Club, San Diego Yacht Club, and Golden Gate Yacht Club.

After the America’s Cup, Golden Gate Yacht Club has gone back to its roots – it is still the Friendliest Club on the Bay and a great gathering place for friends and family.  The America’s Cup has not changed the tenor of the Club nor its members.  Thirsty Thursday is a great time for people to gather for a cocktail and to start to “wind down” from the work week.  The Sunday Brunch is a fantastic time for friends and family to sit together, enjoy the scenic views and chat.  The Club is like the “Cheers Bar” – a place where everyone knows your name, and where everyone is welcome.